It can't rain all the time 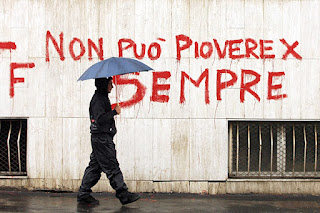 (Hello everyone,I'll try to do an English version of my post.For correction and suggestions ... feel free to contact me!)

This morning, when I was about to leave the underground, I thought: "It can not rain forever."The strange thing is that when I thought the sky was still clear (but I was informed of "the future" by the news weather).This afternoon the sky was quickly covered with huge gray clouds and came down so much water that it seemed the day ... night.
Some of you may remember the sentence of the title because it was sayed in the film "The Raven", that became a cult classic thanks to "her" and his protagonist.
Some time ago a cinema's magazine has launched a quiz among readers. Purpose? Find out which features were most of the films seen.That crow has settled among the first places.
In fact, I remember that not only today but many years ago when the film was released (1994), was full of diaries written with that sentence in a thousand different styles.It 'a phrase so striking, that comes into mind.But what is so special to become a slogan, a motto, a philosophy of life (even) for several generations?

My memory of the film is related to something dark.It was sad, now you could call it maybe a little "emo".The main character was always dressed in black, and his story was tragic.His saying "can not rain forever" would be a sort of encouragement (perhaps) to never give up even when it seems that everything goes the wrong way.
It has become a phrase beloved by teenagers who often find tragedy and insurmountable problems everywhere.
I never mentioned that sentence as the words "cult" of a movie.The first time I saw it I was 11 years old and even then I did not like sad stories, and one color.Even now, when I think, I do not find much sense in that sentence.That it can not rain forever it seems obvious and it seems to me enclosing a thought "submissive".
Since you can not control the rain (and events), I can just keep quiet ... it still will. What i really can do?
Of course if it rains we can not do much. But nowadays we have so beautiful umbrellas and some colored boots out walking in the rain, at times, it is also nice.It can not rain forever but I can still go forward.This is what I think.
The merit of the people has created and placed it in the film is that it still to be able to enter the popular imagination.
And you, did you remember that phrase?What meaning has for you? 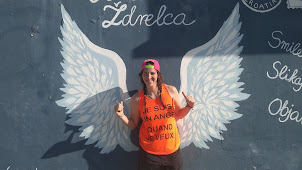